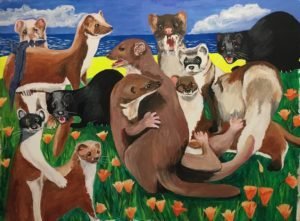 Irene Dogmatic TOO MANY WEASELS

Irene Dogmatic actively started her career as an artist in 1972. She has lived and worked between San Francisco, New York, and Berkeley. Being both a visual and performance artist in SF in the early 1980s, she was active in the Punk Scene with her bands The Beautykillers and the Kahunas plus SST. Travel writing and poetry are a constant as is Correspondence Art which she became involved in during the 70s. Her first solo show at Pro Arts, Project Space opens on December 7 through January 3, 2019.

Dogmatic’s art is about her emotion and perception of the world and politics, “I have always found American Politics distressing and as time goes on it seems more polarized until now it is just over the top.”

Too Many Weasels uses animals as a metaphor: sneaky and sly people. The artist started this painting when she was angry about being treated badly in a store. As she worked on the piece, she began to enjoy the animals so that the anger turned into the fun of the animals.

Metaphors are in Dogmatic’s art constantly. Animals, birds, fruit, American pop symbols and cultural icons from her travels as metaphors for people, romantic themes, and sex. Her perception of the world is that “it is a vast and complicated place that has elements of good, bad and otherwise, wherever you are, and is in a constant state of flux.” She looks for images to photograph or get ideas for paintings from wherever she happens to be, and some get translated to paintings and some just remain photographic compositions. But painting is the most pleasurable act for her.

The artist has shown with Pro Arts at the project space. More info can be found here: https://proartsgallery.org/event/irene-dogmatic-de...